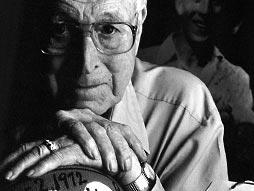 I need to get that out there before you read the rest of this blog. It’s important that I let you know that I have a serious bias towards the man before you carry on reading. I was given a relatively free license when I was tasked with writing these blogs, so here we are.

Now for those like myself who aren’t massive basketball fans, you may not know his name or be able to name who he coached or, if I hadn’t already spoiled it, which sport. During the ’60s and ’70s he won 10 NCAA basketball titles in 12 years, including 7 in a row, with UCLA. He mentored NBA Hall of Famers Kareem Abdul-Jabbar and Bill Walton but was almost more proud of his role players than his stars. For some, myself included, he is the father of modern coaching and over the following few paragraphs I would like to tell you why.

Back in the summer of 2016, I sat in my first module of my MSc in Sports Coaching when John Wooden was first introduced to me. A passing comment in a lecture about how he strove for his players to be chasing high effort rather than results hit a coaching nerve. I aim to be a transformational coach, where learning and performance are achieved through encouragement of extra effort and drive, praising players for their work rate and willingness to do the boring details. After that lecture, I went out and bought two of his books and devoured them in a few days. A coach crush was born.

“Success comes from knowing that you did your best to become the best that you are capable of becoming.”‍

Coaching is evolving. The way it is taught, the way it is practised, the outcomes that are expected. Previously, coaches could have one style and actively expect 15-20 players to bend their learning styles to fit that one individual. This is no longer the case. Coaches are now expected to meld their style to the individuals, maximising the learning and thus the team’s performance. This has really started to take hold in the last 5-10 years or so and is often linked to the current sportspersons generation and their connection to their emotional knowledge.
‍

This was keenly understood by Wooden back in the ’60s. He details in his autobiography ‘They Call Me Coach’ which players needed an arm around them, which needed military discipline, who he could relax his rules for and who would push every single rule he had just to test him. By knowing each player, how to maximise their strengths both mentally and physically, he could form multiple championship-winning teams, especially at the start when they weren’t stocked with future Hall Of Famers.
‍

“I don’t believe in praying to win.”‍

Wooden prided himself on being a practice coach, not a game coach. That is to say, he believed that if he created a competitive, open and intense training program, games would look after themselves. He was not a drill for drill’s sake coach, instead focusing on making sure anything he did had game based comparisons. His focus was not on winning games, but on preparing a team to its maximum potential. He believed this would carry a less talented team focussed on the process much further than a highly talented one who only focussed on the end goal.‍

“Whatever you do in life, surround yourself with smart people who’ll argue with you.”‍

For me, this is the single most important quotation I have taken from the man. If everyone is agreeing with you, there is a problem. And although this is a puff piece, there are aspects to his coaching that I don’t agree with. My main issue is his rigidity on rules such as appearance, only allowing certain haircuts and facial hairstyles. With my big ginger beard, I fear I would not have been his cup of tea. For a coach that wanted to enhance players' individual traits, he also still wanted control over finer aspects of their lives, believing his way was the best way to a successful life. Coaches can get stuck in the trap of agreeing with every single seminar they attend or online talk they see or book they read and end up with a mixed bag of beliefs and ideas that are often at odds. His message of don’t be afraid to challenge every idea is one I have tried to take into not just my coaching but as much of my life as I deem sane.

Who is your favourite coach or coaching theory? I’d love to find new gems and new people of whom I’ve never heard but can learn from or decide I definitely don’t want to learn from. Please tweet us, leave a Facebook comment or email me at elliot@playerdata.co.uk - let’s get the conversion flowing!

The Good, the Great and the Even Better: Our 2021 Highlights