The Importance of Re–warm Ups in Winter 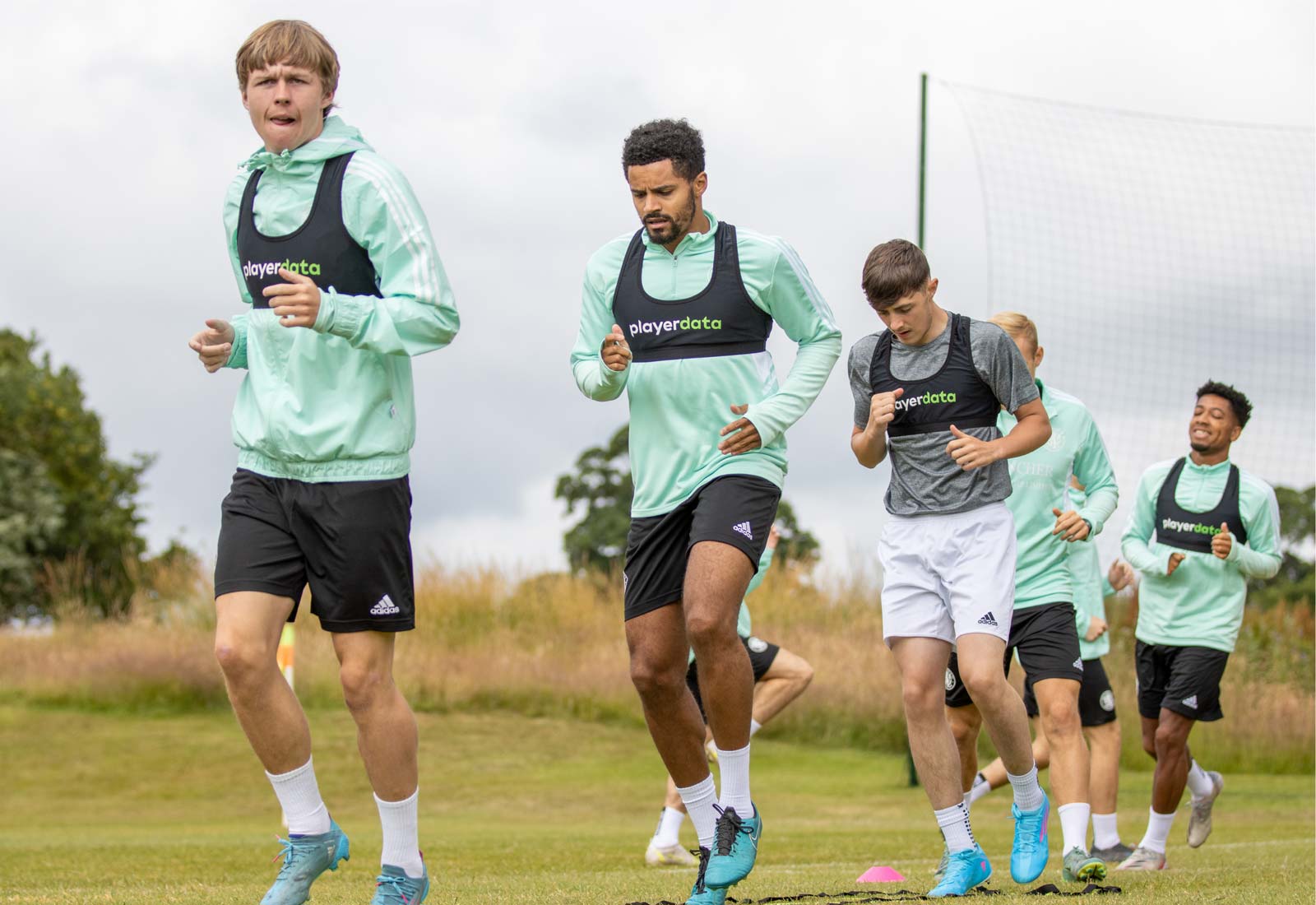 Warm–ups (WU) are a common practice across all sports as we aim to take athletes from a state of rest to a state of exercise which doesn’t enhance fatigue and looks to prevent any non–contact muscle injuries (1). Within football it is common to observe multiple aspects of a warm–up which cover the spectrum of a sports needs: isolated dynamic, static stretching and technical practice which all happen at varying intensities within 60 minutes of kick-off and typically end 10 minutes before kick-off. A meta–analysis by Fradkin found that in 79% of studies investigating WU protocols showed an improvement in athletes physical performance after completing one. Warming up prior to competition is a regular occurrence at every level of sport, from recreational to professional, and has previously shown to increase muscle temperature, decrease stiffness and increase range of motion (ROM) of key joints on the body. It is also commonplace to combine dynamic warm–up strategies with static stretching practices although there is some variability on whether static stretching is recommended. Recent research shows that performing static stretching prior to competition can actually increase the likelihood of injury, as muscles are restricted in their movement, and often tendons can become stressed beyond their limits. Remaining within dynamic techniques can allow us to reap the most benefits whilst also limiting our chances of becoming injured.

WU practices commonly follow the same structure across sports with static stretching, dynamic stretching and injury prevention movements, are all followed by technical practices specific to a teams preparations (2,3,4). Whilst we are aware that warming up in this way helps to prevent injury and prepare players for the demands of competitive sport, little is known about the optimal time a warm–up should last for, with these aspects varying from 15 – 45 minutes. There was very little evidence to support warm–ups until recently. Researchers have investigated how to best prepare athletes for the demands of competitive sport, which has led to one of the more popular methods to structure a warm–up – the RAMP Protocol. RAMP is split into four parts; ‘Raise’ – Increase heart rate, ‘Activate’ – key muscles used in the sport, ‘Mobilise’ – key joints used frequently and ‘Potentiate’ – prepare for explosive actions. A fantastic material used widely by coaches is implementing the FIFA 11+ movements into their warm–up. This document is linked below and offers coaches easy to use warm–up exercises to supplement what they already perform. This can help reduce the chance of injury in players and ensure they perform the final section, ‘Potentiate’, to help prepare players for the explosive movements of football.

Commonly in team sports such as Football and Rugby, teams will go through a pre-match warm–up which lasts on average around 30 minutes with a 12 minute break between the end of the warm–up and beginning of the competition. These warm–ups commonly follow a general conditioning preparation, followed by technical exercises which are designed to prime neural pathways. This helps improve player co–ordination by doing sport specific–movements and increases game speed neuro–muscular activation to help players recall key movement patterns. Using small–sided games (SSG) towards the end of a warm–up period is a very important tool for coaches as it helps to simulate the physical and physiological demands associated with the sport. Coaches achieve this by replicating the game specific movements and demands at a lower intensity by including: passing, shooting and ball–control in various positions. Evidence currently shows that including short duration (3 repetitions of 2 minutes) SSG’s presents improvements in repeat sprint and reactive agility performance during competition.

Further studies have shown us that following half–time in football there is a decrease in the physical outputs from players, despite prolonged rest for the first 20 minutes of the second half (5). This is particularly evident when we compare this period to the same in the first half which follows a warm–up, where players show better physical performance in metrics such as total distance and high intensity distance (5). When we consider the reason for performing an initial pre–match warm–up being to prepare players for the demands of competition and reduce injury, it is a wonder why we don’t also prepare players for the demands of the second half. With a decrease in preparation, and a reduction in muscle temperature from common practices, we have observed that in the opening 20 minutes of the second half players are at a higher risk of muscular injuries (6).

So how can we prepare players when we don’t have 40 minutes to warm up again?

Research suggests that whilst traditional half–time procedures provide a key moment to get vital tactical information through to players, we also need to understand the physiological decrease that happens while they receive this information. Key muscle temperatures can decrease by 3ºC with particular focus on lower body muscle groups, placing players at an enhanced risk of injury when they re–emerge. It is important then that we look to build this temperature back up through a re–warm up (RWU) following tactical advice. We know that this decrease in muscle temperature can have a detrimental effect on injury susceptibility, and can increase an athlete's chance of being injured through a non–contact injury in the preceding 20 minutes of competition. Research has suggested incorporating a few different techniques to elicit a muscle re–warm up, which can have a positive impact on players injury susceptibility and increase a players ability to perform key movements after half time intervals (7).

Research has noted that performing 7–8 minutes of running–based exercise, followed by 4 sets of 5 jumps, improved players' abilities following half–time intervals. It’s always important though to consider the practicality of implementing this in practice, and that this would only leave you with 8 minutes to discuss tactical changes, which likely isn’t enough time for coaches to fully implement what they need to cover. In fact, you can gain just as much benefit in a shorter amount of time by having players perform plyometric activities such as jumps and fast–feet exercises, alongside some short ball work activation, within a 5–minute period to elicit the same results. Using this method can help coaches get more time to go over tactical instructions whilst also keeping players warm.

It would be worthwhile for coaches to consider performing a short RWU period before the beginning of the second half to help re–raise muscle temperature and reduce chances of injury occurring in the initial 20 minutes of the second half, without creating further fatigue in the players. Including end WU features such as jumping and short sprints will help players gain further activation which has been shown to improve sprinting and jump performance after half time breaks across all levels of football which, when used alongside short technical bouts, can prepare players properly for the demands of the second half and ensure that players are able to perform at their best (8).

Alongside using RWU, as a way of maintaining player performance throughout each half, there are also passive ways of keeping players warm during the half–time interval. Passive techniques are those which require little to no movement in order to generate heat, as opposed to active techniques such as physically warming up. These passive techniques have been shown to be safe, and can prevent any physiological impact on performance such as fatigue, which can cause decreases in performance. From the research, we are aware that using methods such as heat garments throughout half–time can help athletes maintain their muscle temperature following the first half of competition, which in turn helps athletes maintain and even improve their performance levels (8).

Passive strategies to maintain body temperature can also include methods such as being in a warm bath and drinking hot drinks, but aspects such as warm baths aren’t practical for many clubs, and so it’s recommended to maintain warm–ups and active warming strategies. Passive methods also come with an additional cost to clubs (sourcing garments, or electricity to heat the garments). A non–cost impactful method would be to have players wear extra layers during half time talks but this can make players uncomfortable and lead to excess heat build up.

Both passive and active warming techniques have shown an ability to help players maintain their performance levels following half time intervals. They have shown to decrease, and consequently expose players to, the risk of muscle injuries – particularly in the hamstrings, in the opening 20 minutes of the second–half. Coaches should aim to devote time to warming players up prior to the start of the second–half to ensure an easy transition in performance, and an immediate implementation of tactical changes.

You can see how your team compares throughout the game within the PlayerData app by clicking into your match session and viewing the 5 minute breakdown of your team's average distance. You can also compare athletes to the team and split first and second–half performances.‍

See how you can give your team the EDGE and train like the pros.